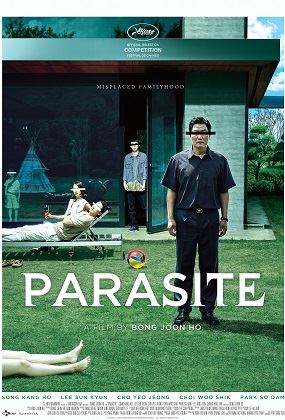 The first ever (South) Korean film to win the Palme d’Or at Cannes, Parasite has led to director Bong Joon-ho being positioned as “one of the world’s most inventive and captivating filmmakers”. Described by Peter Bradshaw, who gave Parasite 4 stars in The Guardian, as “a bizarre black comedy about a rich Korean family and a poor one in a modern-day Downton Abbey situation” and by D M Bradley in the Adelaide Review as “amongst the most beautifully made, uncomfortably funny and dangerous movies of the year”, Bong Joon-ho himself described it as “a comedy without clowns, a tragedy without villains”.  Rightly described as ‘genre-busting’ by the ABC’s Luke Goodsell, Parasite (2019) moves effortlessly but mind-bogglingly between social drama, thriller, comedy, political satire, surreal and horror genres. Outrageously watchable!