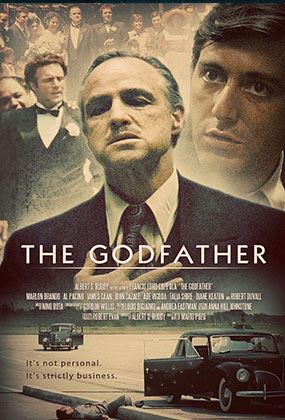 The screenplay of The Godfather (Part 1) (1972), the first in our series of four Members Only films exploring diverse roles of screenwriters in film, was written by Francis Ford Coppola in conjunction with Mario Puzo, drawing on Puzo’s novel. This seminal film introduces us to the Corleone family: patriarch ‘Don’ Vito Corleone (Marlon Brando) and his sons, Fredo (John Cazale), Sonny (James Caan) and Michael (Al Pacino) and we witness the generational shift in power from one Godfather to another. In transferring the story of the Godfather from page to screen, Coppola created a film masterpiece out of what he considered “a potboiler filled with sex and silliness”, distributing the book over three films, introducing actual mafia history, severely editing and at times changing the plot.

We welcome to you join us for the informal discussion post screening.
Complimentary tea and coffee and cash bar are available.