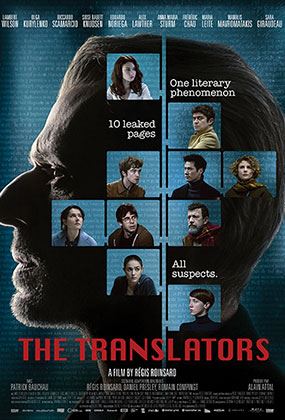 Described by David Stratton as “Agatha Christie meets Hitchcock”, The Translators involves nine writers assembled in an impenetrable bunker within a French chateau to translate the third soon-to-be-released book in a block-buster trilogy.  The book’s plot must be kept secret till its release. To combat piracy, phones and tablets are confiscated and the nine translators from nine different language specialties are overseen by armed Russian guards during the two months allowed to complete the translations.  None of the nine knows the book’s ending as they are given only 20 pages a day.  What follows is a mystery involving hacking, a ransom demand, red herrings, unexpected revelations and more–all expertly managed by director Guillaume Schiffman and a wonderful ensemble cast.